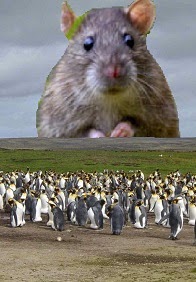 The rat in question has been living on South Georgia for some two centuries now, and is believed to have been introduced there by visiting sailors. For the past couple of hundred years it has fed on the chicks of the millions of seabirds that nest on the island, and has caused their populations to crash by some 90%.

“You remember how MacDonald’s staff used to ask you if you wanted to ‘go large’ on your meal?” asked Professor Balsam. “Well this fat bastard has been going large on King Penguins for decades. And look at the situation now – we’ve got a seabird population that’s teetering on the brink of total collapse, and a rat that blots out the sun as it waddles around chowing down on penguins and albatrosses”.

Professor Balsam’s team will begin a £2.5m poison bait-dropping program in February 2015. They intend to use helicopters to airlift in a 95 tonne pellet of Brodifacoum, which will be cunningly concealed in the traditional fashion beneath a massive section of plastic guttering held down by a couple of big stones.

“We’re hopeful the rat will take the bait and succumb once and for all,” commented Professor Balsam. “But just in case it doesn’t, we’ll be leaving a secure store of poison on the island afterwards by way of a contingency plan. I’ve seen Godzilla. I know how difficult it is to slay an improbably super-big kaiju.

“And I don’t fancy trying to use a cricket bat to deliver a coup de grace to this hairy motherfucker”.