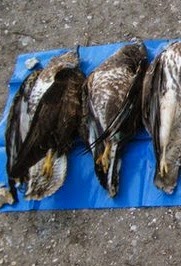 A gamekeeper from Norfolk, Allen Lambert, was convicted last week of poisoning 11 birds of prey on the Stody Estate in what the RSPB described as the ‘worst case ever detected in Britain’

District judge Peter Veits warned Britain’s rural aristocracy that they need to take responsibility for their employees’ actions, but fell short of imposing a custodial sentence on Lambert, instead convicting him to a 10 week jail term suspended for one year. While many felt this was unduly lenient given the gravity of Lambert’s crime – he was found guilty of poisoning 10 Buzzards and a Sparrowhawk – higher powers were alerted to his misdemeanours, and are imposing a far sterner sanction.

“He’s not going to get any presents from Father Christmas this year,” said Buddy, a spokeself from Lapland. “Santa doesn’t bring presents to naughty boys and girls, and Allen’s been a very naughty boy indeed this year.

“Santa’s not cross with him. He’s just very, very disappointed. And he hopes Allen will be better behaved next year

Whilst many bird-lovers were initially dismayed by the perceived leniency of the sentence, they have been mollified by the stern response from Santa Claus. Tom Logan, a birder from Norwich, said “This is more like it. Ideally, I’d have liked to have seen him sent down for at least six months, if not longer. But at least this way he won’t be finding any shiny new pots of Carbofuran in his stocking on Christmas morning, and that’s going to hurt him deeply, I’m sure”.

Others are less convinced. “Fuck that shit”, said the Easter Bunny. “This bitch gets nothing from me anytime soon. Years without an Easter egg...

"He should have thought about that when he poisoned those birds”.