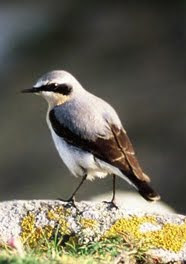 As southerly winds have wafted in the first Wheatears of the year, local patch-watchers have been out all weekend straining to find themselves the only passage migrant they're likely to see all spring on their dismal inland beats.

Tom Logan, a patch-watcher from Croydon said "I found a male Wheatear yesterday morning on the area of miserable industrial wasteland I like to think of as semi-arid upland habitat. It was foraging amongst the broken lumps of concrete and twisted reinforcement rods, and my heart lifted the moment I saw it.

"Later that evening, when I was trying to have a quiet wank in the bathroom after Match of the Day without waking up my wife or daughter, I suddenly realised that I was getting more joy out of that solitary Wheatear than I do out of my regular Saturday night spasm into a bit of bog roll. Shame I'm going to have to wait a whole year before I get that moment of sheer elation all over again... but on the other hand, that's kind of like my marriage anyway."

Debbie Logan, an embittered and unhappy housewife from Croydon said, "My husband's a sad wanker who likes spotting birds and writing them down in a little notebook. Is that grounds enough for a divorce, or should I tell you about the hours he spends writing up his tragic little blog all about the birdies he's spotted on 'his patch'? Who reads that shit? I mean really, who does? Other wankers like him, I bet. There's a whole army of unhappy women like me out there. There'll be blood spilt one day, I'm telling you. Blood."
Posted by Mr White at 20:05